The City & The City: A Novel (Paperback) 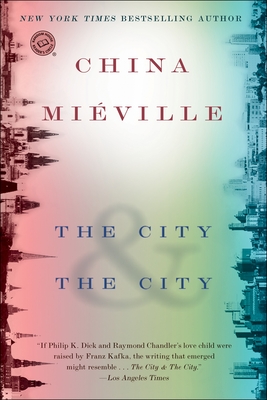 The City & The City: A Novel (Paperback)

NAMED ONE OF THE BEST BOOKS OF THE YEAR BY THE LOS ANGELES TIMES, THE SEATTLE TIMES, AND PUBLISHERS WEEKLY

When a murdered woman is found in the city of Beszel, somewhere at the edge of Europe, it looks to be a routine case for Inspector Tyador Borlú of the Extreme Crime Squad. To investigate, Borlú must travel from the decaying Beszel to its equal, rival, and intimate neighbor, the vibrant city of Ul Qoma. But this is a border crossing like no other, a journey as psychic as it is physical, a seeing of the unseen. With Ul Qoman detective Qussim Dhatt, Borlú is enmeshed in a sordid underworld of nationalists intent on destroying their neighboring city, and unificationists who dream of dissolving the two into one. As the detectives uncover the dead woman’s secrets, they begin to suspect a truth that could cost them more than their lives. What stands against them are murderous powers in Beszel and in Ul Qoma: and, most terrifying of all, that which lies between these two cities.
China Miéville is the author of King Rat; Perdido Street Station, winner of the Arthur C. Clarke Award and the British Fantasy Award; The Scar, winner of the Locus Award and the British Fantasy Award; Iron Council, winner of the Locus Award and the Arthur C. Clarke Award; Looking for Jake, a collection of short stories; and Un Lun Dun, his New York Times bestselling book for younger readers. He lives and works in London.

“Daring and disturbing . . . Miéville illuminates fundamental and unsettling questions about culture, governance and the shadowy differences that keep us apart.”—Walter Mosley, author of Devil in a Blue Dress

"Lots of books dabble in several genres but few manage to weld them together as seamlessly and as originally as The City and The City. In a tale set in a series of cities vertiginously layered in the same space, Miéville offers the detective novel re-envisioned through the prism of the fantastic. The result is a stunning piece of artistry that has both all the satisfactions of a good mystery and all the delight and wonder of the best fantasy.”—Brian Evenson, author of Last Days

“China Mieville has made his name via award-winning, genre-bending titles such as King Rat, Perdido Street Station, The Scar and Iron Council. Now, in The City & the City, he sets out to bend yet another genre, that of the police procedural, and he succeeds brilliantly…. [An] extraordinary, wholly engaging read.” — St. Petersburg Times

“An eye-opening genre-buster. The names of Kafka and Orwell tend to be invoked too easily for anything a bit out of the ordinary, but in this case they are worthy comparisons.” — The Times, London

“An excellent police procedural and a fascinating urban fantasy, this is essential reading for all mystery and fantasy fans.”—Booklist, starred review

“This spectacularly, intricately paranoid yarn is worth the effort.” — Kirkus, starred review