Kingdom of the Wicked (Paperback) 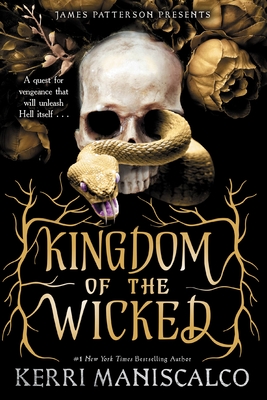 Kingdom of the Wicked (Paperback)


On Our Shelves Now
From the #1 New York Times and USA Today bestselling author of the Stalking Jack the Ripper series comes a new blockbuster series...

Two sisters.
One brutal murder.
A quest for vengeance that will unleash Hell itself...
And an intoxicating romance.

Emilia and her twin sister Vittoria are streghe - witches who live secretly among humans, avoiding notice and persecution. One night, Vittoria misses dinner service at the family's renowned Sicilian restaurant. Emilia soon finds the body of her beloved twin...desecrated beyond belief. Devastated, Emilia sets out to find her sister's killer and to seek vengeance at any cost--even if it means using dark magic that's been long forbidden.

Then Emilia meets Wrath, one of the Wicked--princes of Hell she has been warned against in tales since she was a child. Wrath claims to be on Emilia's side, tasked by his master with solving the series of women's murders on the island. But when it comes to the Wicked, nothing is as it seems...
Kerri Maniscalco grew up in a semi-haunted house outside New York City, where her fascination with gothic settings began. In her spare time she reads everything she can get her hands on, cooks all kinds of food with her family and friends, and drinks entirely too much tea while discussing life's finer points with her cats. She is the author of the #1 New York Times bestselling Stalking Jack the Ripper quartet.

Praise for Kingdom of the Wicked:

"An intoxicating, tightly plotted feast for the senses with a dramatic cliffhanger."—Kirkus Reviews

"Lyrical writing and an immersive atmosphere accompany a well-built world rooted in 19th-century Palermo, especially evocative descriptions of food prepared in the family's restaurant, while intriguing plot twists round off the novel."—Publishers Weekly

"The characters are richly drawn; the worldbuilding is smart, based on historical events and infused with magic; and the page-turning plot is a force to be reckoned with. Food, family, magic, and romance are threaded into this propulsive story, making it a thrilling, wondrous, and atmospheric tale."—Booklist

*"A marvelous yet somewhat gruesome mystery...an unexpected twist makes the ending worth the wait. A must-have."---School Library Journal (*starred review*)

"Kerri Maniscalco once again combines adventure, romance, murder and Victorian manners into an intoxicating cocktail that brings the story of this tenacious young forensic scientist to a satisfying conclusion."—Knoxville News Sentinel

"There are plenty of suspects and red herrings as well as tense escalations....A scenic, twisty mystery."--- Kirkus Reviews

"Maniscalco has created a serious, sharp-minded, and forward-thinking protagonist in Audrey Rose, whose fearlessness will endear her to readers looking for an engaging historical thriller. Abundant red herrings and a dash of romance round out this gruesome but engrossing story."
--- Publisher's Weekly

"Audrey is a young woman eager to use her brains and willing to flaunt society's rules....This mystery pays homage to classics like Doyle's Sherlock Holmes and Mary Shelley's Frankenstein [and] will satisfy those readers looking for historical mystery, a witty heroine, and a little romance."
---School Library Connection

"Audrey Rose is a witty, resourceful feminist who refuses to bow to Victorian-era gender norms. This dark, gothic landscape is peopled with nuanced, diverse characters who keep readers enthralled. A gripping mystery with a compelling heroine and just the right touch of romance." --- Kirkus Reviews

"Every bit as heart-pounding as you'd expect it to be...An enthralling, captivating, and addicting series."---Hypable