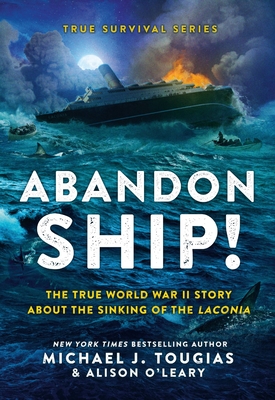 Coming Soon - Available for Pre-Order Now
A remarkable World War II account of a maritime attack off the West African coast, for fans of Steven Sheinkin and Deborah Heiligman.

On September 12, 1942, the RMS Laconia was attacked by a German submarine 500 miles off the coast of western Africa. What the Germans didn’t know was that they had just attacked their allies: locked below decks on the British ship were nearly 1,800 Italian prisoners of war. When the Germans realized their mistake, they made the unprecedented decision to rescue all survivors regardless of their nationality, attempting to declare the waters a neutral zone. But when an American bomber flew over the humanitarian effort, he was ordered to drop bombs, contributing to the deaths of many Italian POWs and British civilians in the process. Some of those who remained alive endured weeks adrift at sea, fighting for survival with little water or food, and in shark infested oceans. Suspenseful and informative, and including historic photographs, this incredible true account is a testament to the idea that compassion can rule over conflict—even at the cruel heights of war.

Michael J. Tougias is the author of many award-winning true rescue stories, including the New York Times bestseller The Finest Hours, A Storm Too Soon, Into the Blizzard, and Attacked at Sea, as well as the young reader’s adaptation of In Harm’s Way by Doug Stanton. A frequent lecturer, Tougias splits his time between Massachusetts and Florida.

Alison O'Leary is an award-winning journalist based in New England. She is a former correspondent for the Boston Globe and the co-author with Michael Tougias of Attacked at Sea.