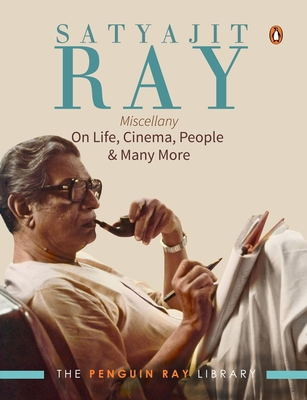 'Satyajit Ray, I salute you. The greatest of our poets of the cinema'-Ben Kingsley

Satyajit Ray (1921-1992), one of the doyens of world cinema, gave a unique aesthetic expression to Indian cinema, music, art and literature. His writings, especially, autobiographical works, thoughts on filmmaking, screenplay writing and eminent personalities from art, literature and music, among others, are considered treasure troves, which largely remained unseen and therefore less known till date.

Satyajit Ray Miscellany, the second book in The Penguin Ray Library series, brings to light some of the rarest essays and illustrations of Ray that opens a window to the myriad thought-process of this creative genius. With more than seventy gripping write-ups and rare photographs and manuscripts, this book is a collector's item.

Satyajit Ray (1921-92) was one of the greatest filmmakers of his time. In 1992, he was awarded the Oscar for Lifetime Achievement by the Academy of Motion Picture Arts and Sciences. In the same year, he was also honored with the Bharat Ratna.

Ray was also a writer of repute, and his short stories, novellas, poems and articles, written in Bengali, have been immensely popular. He has published several books in Bengali, most of which became bestsellers. He is also the author of the famous Feluda stories, the translations of which have been made available by Penguin.