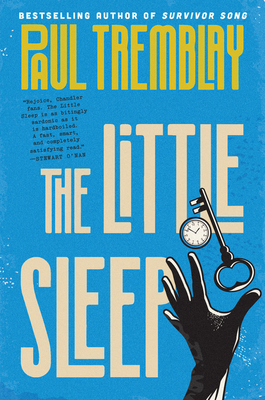 This is book number 1 in the Mark Genevich series series.

The Bram Stoker Award–winning author of Survivor Song and The Cabin at the End of the World “slices, dices, and spins the neo-noir in his own strange way” in his “fast, smart, and completely satisfying”* debut novel featuring a narcoleptic detective from Southie.

The Little Sleep is Paul Tremblay’s nod to Raymond Chandler starring a PI who nods off. Mark Genevich is a South Boston private detective who happens to have a severe form of narcolepsy, which includes hypnagogic hallucinations, like waking dreams. Unsurprisingly, his practice is not exactly booming.

Then one day the daughter of an ambitious district attorney and a contestant on the reality talent show American Star named Jennifer Times comes to him for help—or does she? A man has stolen her fingers, she claims, and she’d like Genevich to get them back. When the PI wakes up from what must surely be a hallucination, the only evidence that his client may have been real is a manila envelope on his desk. Inside are revealing photos of Jennifer. Is Genevich dealing with a blackmailer or an exhibitionist? And where is the mysterious young lady, who hopefully still has her fingers attached?

The detective has no choice but to plunge into what proves to be a bad dream of a case, with twists and turns even his subconscious could not anticipate. Chloroforming the hardboiled crime genre then shaking it awake and spinning it around, Paul Tremblay delivers a wholly original, wildly imaginative, gleefully entertaining noir mystery—guaranteed to keep you up all night, even if Mark Genevich won’t be joining you.

Paul Tremblay has won the Bram Stoker, British Fantasy, and Massachusetts Book awards and is the author of Growing Things, The Cabin at the End of the World, Disappearance at Devil’s Rock, A Head Full of Ghosts, and the crime novels The Little Sleep and No Sleep Till Wonderland. His essays and short fiction have appeared in the Los Angeles Times, Entertainment Weekly online, and numerous year’s-best anthologies. He has a master’s degree in mathematics and lives outside Boston with his family.

“Rejoice, Chandler fans. The Little Sleep is as bitingly sardonic as it is hardboiled. Like Jonathan Lethem in Motherless Brooklyn, Paul Tremblay slices, dices and spins the neo-noir in his own strange way and delivers a fast, smart, and completely satisfying read.” — Stewart O’Nan

“I picked up The Little Sleep, planning to just read a few pages, knowing full well I didn’t have time to dip into it. Several hours later I was closing the book with a satisfied grin. The best thing I can say about this is the classic ‘I couldn’t put it down’ and mean it. It’s original and different, and yet somehow good kin folk to what has gone before in the tradition of Raymond Chandler.” — Joe R. Lansdale

“The fact that Mark can’t trust his own perceptions gives The Little Sleep an edge of existential crisis…It’s a terrific plot device, especially in a first-person mystery…The Little Sleep offers up an interesting gloss on the detective genre, in which the deepest and most profound mystery has less to do with any crime per se than with the enduring enigma of self.” — Los Angeles Times

“It’s hard not to root for the loopy Genevich… [in this] promising debut.” — Booklist